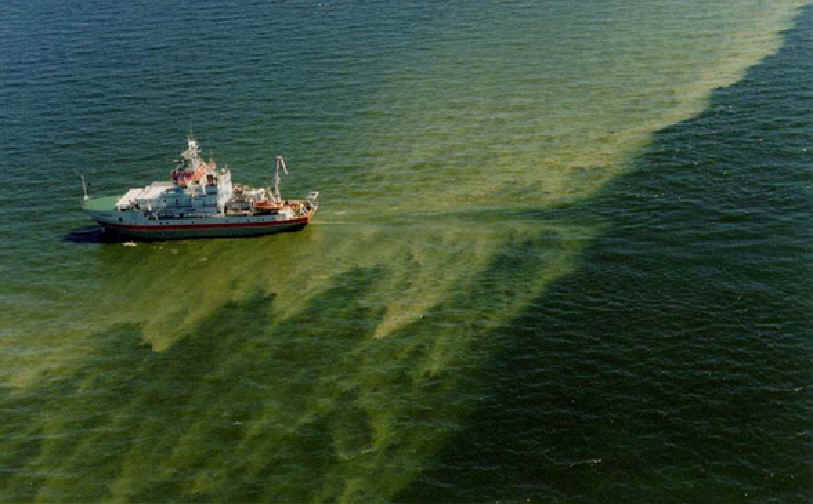 I really can’t stand the idea of dead zones in the ocean.

Dead zones are areas in the water where algae blooms as it feeds on nutrients in high concentrations of foreign matter, such as methane, in this case, or, more typically, the components of farmland fertiliser runoff into water. The algae gorge, reproduce quickly and then, in turn, are eaten by bacteria in a process that depletes the immediate area of oxygen. Fish and other sea life cannot survive in these zones.

“you might create areas that are deprived of oxygen. You might alter ecosystems in ways you don’t understand. You might actually create organisms in your algae patch that put up greenhouse gasses more potent than the carbon dioxide, like methane.”

The really big story is here!

Then there’s the issue of how to grow millions of acres of the stuff — a prospect that concerns people uncomfortable with genetically modified crops. The top companies have very different approaches, which suggests that there is not yet a clear winner…

“And the true challenge is not only to figure out how to breed the best pond scum, grow it as easily as rice, and bring it to market, but to do it all at a cost approaching that of conventional gasoline. The really inconvenient truth is that no one in the biofuels world anticipates that green crude will earn any real premium from consumers over the Deepwater Horizon brew.

If that model turns out to be the right one, the future of the biofuel industry looks fairly straightforward. Cultivation ponds drawing water from farms, waste-streams, tainted reservoirs, the ocean and other sources would be dotted thickly throughout the southern half of the United States, each producing three to four million gallons per year. To replace the entire crude oil usage of the country, it would take between two and three thousand of these ponds, according to my back-of-the-envelope calculations.

This was so interesting…

I must say, it does feel like an on-going experiment doesn’t it?

Kind of like playing around with tinker toys as kids.

More is here on the “frankenplanet” concept.

And then, of course there is the big ethical question, too.

More frankenplanet! Can you believe it?

That “small people” concept?  I’m wondering about that in the hands of these geoengineering-pioneers, no?