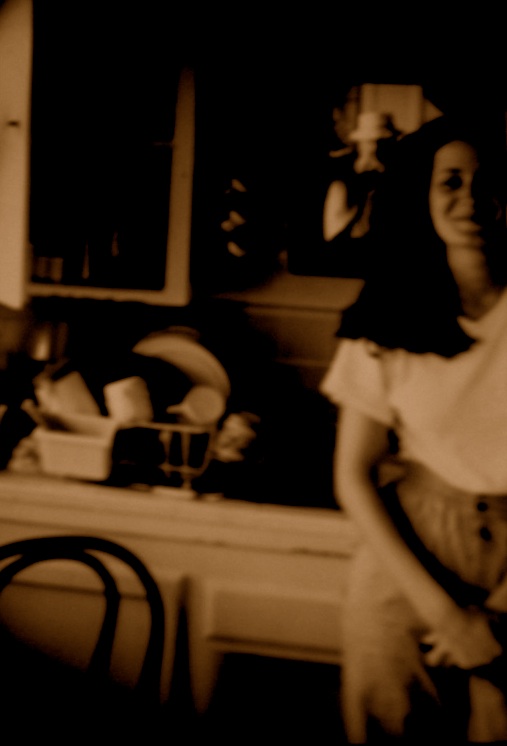 Hurdy Gurdy men.  There will be a series of them for you.  You managed to stay alive, didn’t you?

You moved from Red Rose to that place on Fig.  It only had three rooms and it had a little balcony where you grew roses in containers.  You had a student loan and you had a job.  You were twenty three and your grandfather was visiting because he’s there in the mirror, but you’re looking at your hands many years later, protecting the place where the wound was deepest.

It’s not a wound you could ever discuss with the members of your family because white girls couldn’t.

The pain was something you had to bear alone, and you did in that little apartment with your schoolbooks in the second year in the UC system.  You are getting your degree no matter what, aren’t you?

You decided that.  You decided not to lie down and die like you wanted to, afterwards.

He had no idea of how much he had hurt you.

You began to cure yourself by trying to eat little bowls of oatmeal and learning to cook.  You walked to the Farmer’s Market on Saturdays with your little French string market bag.  You filled it with vegetables and flowers and you bought a little starter set of tools.  A screwdriver and a hammer.

A friend built you a darkroom in your closet.  You could still make pictures.  You used the bathtub for your developing trays.  You thought about Georgia and Frida because you were learning about women artists.  You’re writing a paper for school in Women’s History and the question is: Discuss three generations of women in your family.  What are the similarities and what are the differences?

Years later you decide to expand on that.

You’re walking by the old La Paloma when he comes running out in his dishwashing outfit looking like some mad Picasso only taller and bulkier.  He steps in front of you and says, “You have got to be my date.”

You shake your head slowly back and forth and say, “Look, I don’t even know you.”

“There showing them up at the Ranch.  It’s a great restaurant.”

He tells you he’s in Studio getting the masters and you’re thinking to yourself, I wish I was doing that.  The History of Art isn’t quite the same but you figure you’ll be getting a job in an Art Museum some day.  Something solid.  Taking studio was something you weren’t brave enough for in the early eighties.  You knew you’d have a rough go because the field was dominated by men, wasn’t it?

His sculptures are massive.  He’s painted them in vivid colors.  He’s cutting plywood and hammering the shapes together.  He’s living the life you want to be living in his studio sleeping on a foam pad in a sleeping bag.  The sculptures soar to the sky like bright iron birds that he’s welding together.  He sees the darkroom and nods only briefly.

“Don’t you have any food in here?”

He’s hungry and he’s opening the icebox.  It’s a year later.  It took you a year to fully heal, as if that is ever possible.  It took you a year to try and keep anything down at all, besides the oatmeal.  He’s poorer than you because you are working at a better place.  You’re a proofreader.  You’re in the Arts Library on workstudy, shelving books and looking at Frida when you can.

White girls are supposed to be Muses.

He’s pulling down the Murphy bed.  The springs squeak profoundly.  It’s better than his foam mattress and besides you might be a place where he can eat between sculptures.

You’re his equal aren’t you?

He’s pulling down the bed and the springs are squeaking like it’s some kind of cheap hotel room where artists wrap around themselves or figure out how to feed each other and he’s given you a painting and it hangs on the wall next to your Diebenkorn print and the print you have up of Klimt’s is staring at you from the opposite wall.

It’s actually your favorite because you are looking for that kind of a kiss with each one of them, aren’t you?

He’s like a battered boxer, all arms and black hair and paintbrushes flying full of house paint and he loves Motherwell and years later you see him as a broad stroke that flew in and flew out because he was on his way to wherever he was going like some kind of huge metallic bird.

What he wanted was something soft and yielding and something that had food in her kitchen not roses on her balcony.  What he needed was some kind of household that you couldn’t provide because you weren’t willing were you?  You weren’t willing to give it all up just to please a man and be some kind of muse working all day while he suffered for his art and he couldn’t make it with you anyway because he was impotent that day wasn’t he?

It’s not something women really talk about is it?

Your mother once told you that if this ever happened with a man not to say anything because it would just destroy them.

And you handed him a kimono and you put one on and you scrounged around in your little cabinets for some things to make spaghetti because you always had those on hand and you turned on the television and watched an old movie together while it simmered.  There were herbs that you picked growing out on your balcony and you had bread and wine.