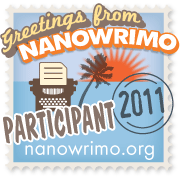 So, bleary with it and has to get to finish.  All in all, this has surpirzed me.  From the first day opening grafs:

I didn’t realize what would happen when I opened the old trunk.  I was searching for myself, or something that I had lost of myself.  The story of my ancestors.  In them I could know everything.  Or I could find everything.  I wasn’t lost.

My grandmother’s wedding dress was in fragments from the 1920’s.  The fragility of the lace was torn but the beads were intact.  She’d been a flapper like Daisy in the Great Gatsby.  I ran my fingers over the surface of the lace thinking of her softness.  Her kindness.

She lived in a time when women didn’t work, unlike my time.  Her afternoons were spent by the fire sipping aperitifs.  My grandfather taught me Chinese Checkers by that fireplace.

Outside, the pines whispered as the fog curled in around them, up from the sea.

My grandmother, addressing Christmas cards.  I can see her in her pearls and little sweater sets with jeweled clasps.  What remains of her is her handwriting on recipe cards.  I’m trying to make sense of things that belong to me like the parts of her.

I was eight on the Chinese rug her uncle brought back from the Orient.  I was eight rolling the marbles around.  Years later I would live in the house where marbles appeared like magic coming up from the ground.  I don’t think I was able to understand marriage.  Because the only marriage I ever saw last was my grandparent’s.

My mother gave me the trunk when I was a little girl.  I haven’t looked at it in years, like I haven’t been upstairs for years.  That became his room.  It’s knotty pine from the 40’s.  A man’s room.  He took it over.  Once he said, “this is the only house where I ever felt home.”

I believed him when he said that.  Or maybe I just wanted to believe him.  Maybe years from now when I look back at these years I will say it was dreamstime.

Maybe I was dreaming my way through a part of my life and I just didn’t realize it until after all of them were gone and all I had left were the photographs.

and from yesterday 24 days in:

Love, the safe harbor.  it always seems like it will be a safe harbor until it ends, doesn’t it?  It always ends.

I’m so tired my eyelids are barely able to stay open.

I want to lie back as if I am on a bower of flowers, resting, swinging a hammock of peace, a lap of peace in a time of war and terrible things I can no longer believe in.

I want the formal roses my grandfather planted for my grandmother, the fragile lace of the wedding dress she wore, the beads from the 20’s in her age of grace and subtlety.

The lace I held in my hands at fourteen.  The lace that she left me so that I would know what it was to cherish a wedding dress forever, to cherish the man forever, the way she called him Spen, as if it were his private name.  The two of them like little birds together in their nest of civilized cocktails at the cocktail hour.

I want the long sleek silk-satin of the gown, the curves bias-cut, the swim in silken seas together, all tristesse gone, replaced by something else, a scented whirl of tendresse, head resting on his chest, head resting in the crook of an arm, arms wrapped around me.

I wanted the peace that you find in a pair of arms that encircles you and holds you and loves you.  Not some fly by night thing.  It was going to take me a long time until I found that and I knew it.

So I am down to the last 10,000 words plus change.  Whew.  I highly doubt that this pov is one I will choose again, very diff.  This is going to need so much editing, but I am happy.  I have the bones of something.  I have written all these words and I said something about life, death, marriage and love.  I’m not looking back, until I hit 50,000.

back later, hope you had a great thanksgiving & Nano is something I want to do every year in November.  Truly.