It’s a novel about survival in Southern California.  I was thinking of two writers this morning.  Kate Braverman and Janet Fitch and then I read this over at the LA Weekly.

It so happens I’ve read both of those books.  Braverman is one of my idols on the page.  She has been for a long, long time.  So has Erica Jong, and in a sense they are closer in age.  Fitch is more my generation.  So, this novel is coming from the same hard place that I’m sure theirs both did.  It’ll be my third one in Nanowrimo.  I lost the second manuscript where I won.  But that’s okay.  When I was writing it a man was trying to pick me up in Facebook behind the scenes, and we ended up being friends for a little while.  He seemed interesting to me, but actually he was a very jaded alcoholic Los Angeleno and frankly not really much of a writer at all.

So, last time, when I was writing Heart of Clouds — I didn’t begin to do any plotting until after the characters were about halfway in.  All the most wonderful things about my grandfather are in that book, in the grandfather I wrote — the men I wrote, as characters.  It was funny how little pieces of him kept popping up in my mind.  Little things he did, or said.

He’s the best man I ever knew.

I had a family that you couldn’t really tell the truth to?  I mean they were always spouting off about that, but the reality was no.  And so this book is about what happens when you have a family like that.  My main character will be drawing from my earliest days in college.  I had something terrible happen, and it was something that shaped my life afterwards.  I can see that now, clearly.

This is an image from that time: 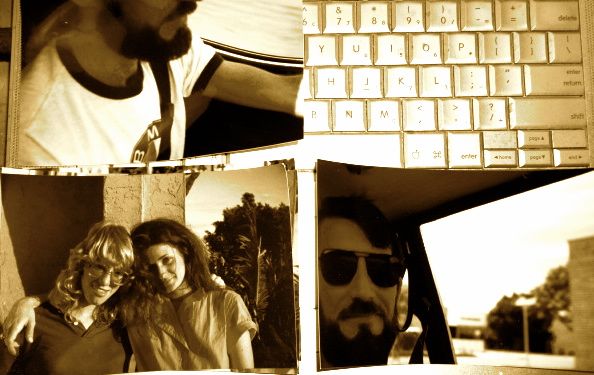 There are certain things you can write about after most of the people in your family are gone?

And you can write truth.

Over in Nanowrimo I put a James Agee quote.  He was one of my favorite writers for his book with Walker Evans called “Let Us Now Praise Famous Men.”

I often like to open my stories that way.  For novels, too.

“How far we all come. How far we all come away from ourselves. So far, so much between, you can never go home again. You can go home, it’s good to go home, but you never really get all the way home again in your life. And what’s it all for? All I tried to be, all I ever wanted and went away for, what’s it all for?”
― James Agee, A Death in the Family

I was in college, and I’m that girl on the right.

He was someone I was in love with.

He was someone who photographed me endlessly, and once he said, “I always photograph the things I’m most afraid of.”

Something that I always said in those days, was this: “What am I to you?”

This book is going to answer that question.

I was in college, and it was an era that men thought they could get away with anything.  Even the teachers felt that way.

The first thing he ever said to me was: “I’m going to seduce you, you know that don’t you?”

I didn’t realize he was married at the time he said that.  I learned that later.

This book of mine is for them.

Today, I listened to X singing “She had to leave Los Angeles.”

I just wanted to study art.

That’s why I was going to college.