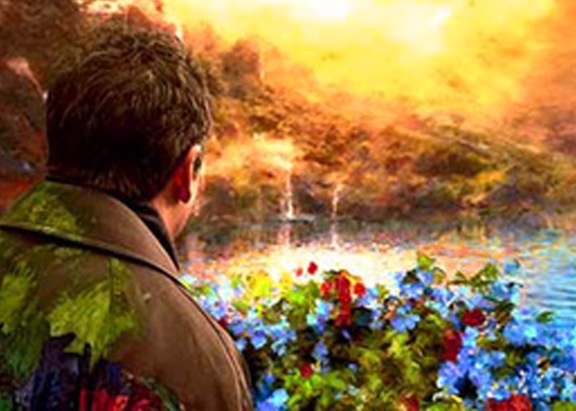 Still sad. I think because I looked at too much news, and I can see too much and then that makes me feel too much. The worst of it was watching twitter slide suddenly post Robin into crummy fast food tweets and all of this has something to do with people who are very sensitive, and the interior garden. Some people have it, and he had it — it’s just that he lost the key, or he misplaced it. I can understand it. We don’t know what is on the other side and it’s really bad here, because there isn’t any love. He was only six years older than me. It might be hardest for my generation given all the things we dreamed about. I’ve known several people that killed themselves. It’s one of those things that comes up. One was the best therapist I ever had. He hung himself from rafters in his studio. So I’ll tell you a little tale of him because he was one of the most magical individuals I have ever known, and something he said to me once, because it relates. He said, “Your inside doesn’t match your outside does it?”
And then he told me about himself, and his mother, and how much she had hurt him in life. He’d written this play and it played off-Broadway at some little theatre in New York and she had crushed him by telling him it was worthless. So you see it’s like that vision that Robin is looking into. There was something he had done, a vision, and she had drawn a black shade over it for him. That’s a technique you employ sometimes as a therapist. You simply tell somebody something true about your own life that matches the situation. So, anyway, Dennis — that was his name — he practiced in a garage filled with books and there were all these paper theatres that he had gotten from Germany or something hanging up in there. I can still see them. When I heard that he had gone, I could barely imagine it. He had meant so much to me. So much.
So I think it’s like that with Robin. He’s never going to know just how much he meant to others. No creative people really do, because they are always thinking it wasn’t enough, or good enough. One thing. We each live in times that we are a product of. It’s not that any of us will escape without pain. People said, “I’m really mad that he did that, how selfish.” But people rarely know the interiors of other people. They don’t take that kind of time. So, for Robin, his outside didn’t match his inside either. You know where you see his inside? His performances. That was him.