Tabula rasa (/ˈtæbjələ ˈrɑːsə, –zə, ˈreɪ–/) refers to the epistemological idea that individuals are born without built-in mental content and that therefore all knowledge comes from experience or perception. Proponents of tabula rasa generally disagree with the doctrine of Innatism which holds that the mind is born already in possession of certain knowledge. Generally, proponents of the tabula rasa theory also favor the “nurture” side of the nature versus nurture debate when it comes to aspects of one’s personality, social and emotional behavior, knowledge and sapience.

Play therapy is a form of counseling or psychotherapy that uses play to communicate with and help people, especially children, to prevent or resolve psychosocial challenges. This is thought to help them towards better social integration, growth and development, emotional modulation, and trauma resolution.

Play therapy can also be used as a tool of diagnosis. A play therapist observes a client playing with toys (play-houses, pets, dolls, etc.) to determine the cause of the disturbed behavior. The objects and patterns of play, as well as the willingness to interact with the therapist, can be used to understand the underlying rationale for behavior both inside and outside of therapy session. Caution, however, should be taken when using play therapy for assessment and/or diagnostic purposes, as fantasy play can, at times, be difficult to distinguish between fantasy play.

According to the psychodynamic view, people (especially children) will engage in play behavior in order to work through their interior obfuscations and anxieties. According to this particular viewpoint, play therapy can be used as a self-help mechanism, as long as children are allowed time for “free play” or “unstructured play.” However, some forms of therapy depart from non-directivness in fantasy play, and introduce varying amounts of direction, during the therapy session.

An example of a more directive approach to play therapy, for example, can entail the use of a type of desensitization or relearning therapy, to change troubling behaviors, either systematically or through a less structured approach. The hope is that through the language of symbolic play, such desensitization will likely take place, as a natural part of the therapeutic experience, and lead to positive treatment outcomes.

CORE SAFETY OF THE WORDPRESS BLOGGING SYSTEM AS CONTAINER FOR SELF!

As I am writing in my project I can see this behind the scenes.  This window has changed over time?  But has always been an elegant and easy and wonderful, as well as artistic model!  Very easy to use.  It is also possible to ENTER as anonymous?  Which is going to be wonderful for treatment purposes.

ADULTS (THERAPISTS) (LIBRARIANS) and so forth (INCLUDING PARENTS) can observe the BLOG of a troubled child as it develops.  Which is so great you can’t even believe it!  CORE SAFETY!

Picture one of BEHIND THE SCENES of what a child might use to CREATE THEIR SAFE SPACE!

Here is a picture of what I see!

From this VERY ELEGANT PLACE, a child (client) will be able to choose an AVATAR of any kind they want.

USING “GRAVATAR” — they will be able to ID themselves.  The concept behind this is BLOG AS JOURNAL, but BLOG as SELF-REFERENTIAL SELF-OBJECT.  Don’t worry if you don’t understand what that means.  It comes from Heinz Kohut.

He is one of the BEST Object Relations theorists!  — So this is SELF PSYCHOLOGY we are talking about!

Also according to Strozier, Kohut’s book, The Analysis of the Self: A Systematic Analysis of the Treatment of the Narcissistic Personality Disorders,[8] “had a significant impact on the field by extending Freud’s theory of narcissism and introducing what Kohut called the ‘selfobject transferences’ of mirroring and idealization”. In other words, children need to idealize and emotionally “sink into” and identify with the idealized competence of admired figures. They also need to have their self-worth reflected back (“mirrored” Note : This term isn’t a synonym of “mirroring”) by empathic and caregiving others. These experiences allow them to thereby learn the self-soothing and other skills that are necessary for the development of a healthy (cohesive, vigorous) sense of self. For example, therapists become the idealized parent and through transference the patient begins to get the things he has missed. The patient also has the opportunity to reflect on how early the troubling relationship led to personality problems. Narcissism arises from poor attachment at an early age. Freud also believed that narcissism hides low self-esteem, and that therapy will reparent them through transference and they begin to get the things they missed. Later, Kohut added the third major selfobject theme (and he dropped the hyphen in selfobject) of alter-ego/twinship, the theme of being part of a larger human identification with others.

Though dynamic theory tends to place emphasis on childhood development, Kohut believed that the need for such selfobject relationships does not end at childhood but continues throughout all stages of a person’s life.[9]

3. WORDPRESS BLOG AS CONTAINER FOR “REAL SELF”

So as we think about the web, and places like “Discuss” and all the anonymous “bought robots” adding textual comments, and so forth, where is the REAL in the WEB?

THIS IS WHAT WE ARE MAKING!

So let me show you something else about why WORDPRESS is the ONLY MODEL for this concept.  Let me show you the next picture!  Of what I can see behind the scenes.

In the picture above you are looking at something I have just written!  I do not know why I have that golden paperclip associated with my POSTS on THE ALCHEMY PROJECT, but from an EXPERIENTIAL sense, I know that I am SAFE!

This concept will apply to the TX PLANNER!

As SAFETY BEHIND THE SCENES OF A CHILD’S BLOG!

LET ME GIVE YOU SOME OTHER EXPERIENCES here as Screen Captures! (Over the last few days)…

One of my favorite things back when I started at WORDPRESS, oh?  Eight years ago or so?  Was the ABILITY to SEE that a friend had come by.  Now, they might not have left a COMMENT on my blog, but to a TROUBLED CHILD SITTING OUT THERE IN THE DARK?  (Think Elliot, Slenderman Girls here) — “SEEING A FRIEND COME BY?” Is a first and wonderful INTERVENTION!

Inserts this — “I AM NOT ALONE”

Let me show you a screen capture of that.

So, Riverdaughter was one of the first people I met in the blogging world, and see she came by! (Check the image above and you will see what I can see above about who came by).

We had been discussing OBJECT CONSTANCY over the last few days.

We can look at RIVERDAUGHTER (her blog) as an EXAMPLE of OBJECT CONSTANCY or PLACE!

My design for this concept has been born here at WORDPRESS over TIME.  The Last Eight Years!

(Based on the EXPERIENTIAL)

To a troubled CHILD — having a friend COME BY like this?  IS GOING TO BE VERY IMPORTANT IN THE ALCHEMY PROJECT as “reality based friend” — OR?  FRIEND AS BLOG EVEN IF WE HAVE NEVER MET IN REAL LIFE!

So let me show you what I saw again today behind the scenes!

Off to the right?  You are seeing PEOPLE who have blogs coming by my blog!  See “MEO” with the “GRAVATAR”

I have TRAVELED over to THEIR BLOG and borrowed an image for an intervention from DEPTH PSYCHOLOGY.  THIS CONCEPT of being ABLE TO SHARE AN IMAGE will b very important in THE ALCHEMY PROJECT, especially for KIDS!

So I want to go back to where we left off yesterday with JUNGIAN TYPOLOGY.  We are only going to be using the simplicity of this image?  As I explain in layman’s terms.

Yesterday we had discussed a THINKING TYPE as Matt.  (CODE IS POETRY) (CODEASLANGUAGE) (CODEASMUSIC) and I had shown you the reverse TYPE as FEELING, with some videos and so forth.

There are very core differences in how the TYPES process and emote, or even in how SMART they are?

BUT ALL THE TYPES MAKE UP THE WORLD!

So all are equally BEAUTIFUL!

We are now going to do the OTHER TWO.  INTUITIVE AND SENSATE.

Basically we do not need the Meyers Briggs.  Just these four.

Let’s think of a new image for all that!  Like this one.

One more screenshot!
So this is showing you what I can SEE that I have written.  I can see that FIVE PEOPLE are LOOKING at what I have been writing.  BECAUSE THEY ARE READING ME.  Is it important for me to know who they are?
MAYBE.
Because I might want to meet them.  But for the purpose of THE ALCHEMY PROJECT?
Just like the experiential having RIVERDAUGHTER or MEO come by?
SEEING THAT THERE IS “SOMEBODY OUT THERE WHO CARES ABOUT ME” (Because reading me)
CORE CONCEPT OF SAFETY WITHIN WORDPRESS AS CONTAINER!
❤
Here is a picture of that: 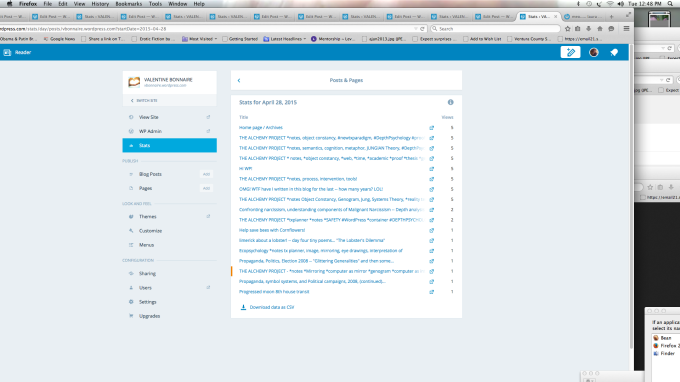 How FAB IS THAT!
❤
UTTER SAFETY WITHIN WORDPRESS!
<3!