Well, it kind of cracks me up that my fave sexy actor played Freud.  So let me get that pix.  Because, in my heart of hearts I think I know that whoever was making that film was trying to crack a code of female behavior Freud tried to crack.  Freud though?  Was pretty much of a jerk.  He is responsible for the diagnosis “Hysteria” in the DSM. 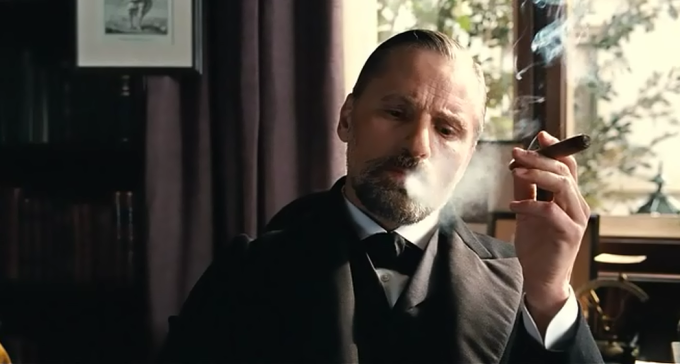 So when I read about the actor NOT being able to whip the actress because he was nervous recently I laughed out loud.   He thought he was grabbing a chocolate before he shot the scene, but instead he swallowed a cigar butt.  Omg.

I HAVE MY STAR.

Okay so what Freud did was operate on women to try and get to the root of things.  But he was a massive sexual fuck up.

Hysteria is caused by lack of sex and non-orgasm.

We are living in those times.

My guess is that Viggo Mortensen has given lots of women orgasms.

The scene from his “Walk on the Moon” is proof of that.

So, you can call me the Charlie Hebdo of Literary Erotica right now.  We are in a totally fucked up world with all the black tents going on.  However I can tell you right now that what the women are going through at the hands of the men is really fucked up.

We are fixing that hetero style.

Because he CAN, and I CAN.

As regards sexuality, since the Etruscan era we have had humans as hetero, gay and lesbian or bisexual.  That’s the truth.

So since gay and lesbian have saturated everything,  we are going to SHOW HETERO to the world.

Not as pornography but as beautiful.  And we will be winning awards and maybe even an Oscar on the way.

So, we are never going to win the bad sex award, like ever.